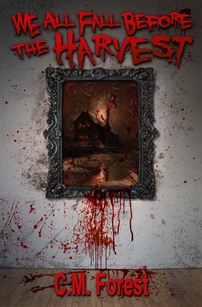 ​In the guts of a nameless city, career criminal Owen fights for his sanity and his life. After stealing a morbid piece of artwork at the behest of his boss, Owen discovers the original owners of the grotesque painting are part of a twisted cult known as The Family—and they’ll stop at nothing to get it back.

The longer Owen possesses the painting, the more it warps his mind and alters the very world around him. Between those that want him dead, his own dark past, and his crumbling grip on reality, the walls are closing in. Unstable but determined, Owen is the only thing standing between our world and the coming Harvest.

"This book was so good, I read it in one day. It had me hooked from the beginning and I was definitely not expecting that ending." -Crystal Loves Books

"There is a lot of horror within the book, as well as some crime and supernatural elements that will surely leave you grossed out and shocked! Some scenes in the novella are surely not for the faint of heart, and the gore packs a punch!" -Curiosity Bought the Book

"There is a little bit of crime, some solid mystery, a dash of thriller, and a lot of grab-you-by-the-throat horror in this book!" -Ben Dongen
Get Your Copy from Amazon Today!
Get Your Copy Direct from Timber Ghost Today!
Note: Amazon Links are affiliate links which means we may receive a small commission for qualifying purchases.